In every audio show in Canada, you can always count on the Bryston Room to be one of the most popular with visitors. It was no exception at this Show. The room was always full of very enthusiastic audiophiles browsing Bryston’s latest gear. The room was dominated by the new Bryston T-Rex speakers that stood around 9-feet tall with an array of 14 driver units. The height itself is going to rule this speaker system out for most house and apartment where the ceiling height is typically 8-feet. (ED: there is a Middle T-REX which is just under 7 feet tall).
Design-wise, the T-Rex comprises two Model Ts stacked on top of each other to form a mirror image. According to James Tanner of Bryston, the T-Rex has extra bracing and a layer of rubber between the two stacked speakers (ED: plus special corner clamps to hold the speakers together). The T-Rex retails for CD$23,000 a pair and that price includes the Bryston BAX-1 three-way electronic crossover. At that price point, The T-Rex could be considered a veritable bargain! The T-Rex pair was driven by an all Bryston combo of the BP-26 preamp, MPS-2 power supply, BDP-3 digital player, BDA-3 DAC, BAX-1 Digital Crossover, BIT-20 isolation transformer, and the 21B Cubed 3-channel power amps. The sound from the T-Rex was easily the best I have heard from any Bryston Speaker that I have heard. The sound stage was immense and the bass while surprisingly deep. Male vocals were rendered with a lot of authority and texture. 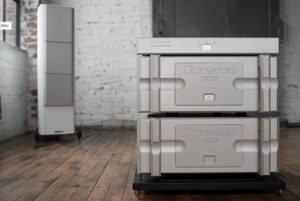